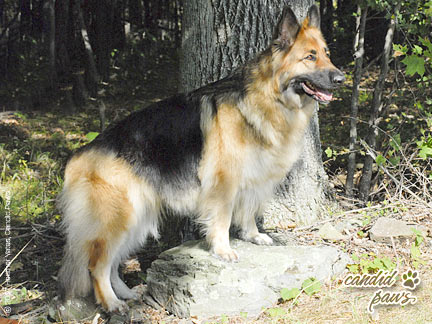 Caly is retired and living a life of leisure

Her Titles and Achievements
Learn More About Caly

Caly (GVx6 brCH G&T’s Calypso Sumr Brz Msn-Dxn, CGC, TT) was the dog we did not expect to get. Traci picked her from a four week old picture early on, but she was the breeder’s pick from the second Artie/Tuesday breeding (2/2004) and not for sale. We put aside our disappointment and moved on, but weeks later got a call out of the blue asking if we still wanted her. Within three hours of getting the call Traci was on her way to pick up “Breezy” from Mason Dixon. Her name changed to Calypso, we got the female we had been looking for since 2002, and the *Artie Boys* became *The Arties*.

She was high energy and incredibly intelligent from the minute she walked into the house, and ornery as sin. The only thing that gave her pause was Alex, our red Persian cat, who she endlessly puzzled over, and in time adopted as her personal, fluffy kitty. Every training experience is always accompanied by a cocked head and pointed look that asks “and exactly WHY do you expect me to do this?” She runs rings around the Artie Boys in smarts, making off with treats and favorite toys through deception.

She has never been overly enthusiastic about showing, resorting to all kinds of unpredictable antics behind the judge’s back, but her innate desire to please and incredible movement has consistently made her a top performer in rare breeds. She finished her Breed, ARBA and Rarities Championships in her first season of showing. She added her Rarities Supreme Grand Championship midway through 2005.

In 2006, she was back in top form, including multiple Best in Show wins at Rarities Labor Day Show Down, Best in Show and Supreme Best in Show at the NCA Specialty sponsored by the ISSDC SE, Best Rare Breed at the Palisades AKC “B” match, and multiple Best in Breed and Best Opposites in Rarities/NAKC and ARBA. She was awarded both TSSR and ISSDC Grand Victrix for both 2006 and 2007, and took Best of Breed in the ISSDC National Shiloh Specialty at Brookville Pa. in May 2007.

Semi-retired in mid-2007 to be bred, her first litter, sired by NS Asgard-Samson was whelped in March 2008. She returned to the show ring after a nine month absence in August 2008, where, in her first debut in Canada, she took 4 BOS, including the ISSDC Canadian Regional Specialty. In the next three months she successively added NAKC Master Supreme and Hall of Fame titles to her credentials. She took Best of Breed in the ISSDC National Shiloh Specialty at Brookville PA in May 2007. She was awarded both TSSR and ISSDC Grand Victrix in 2006, 2007, and 2008, the only female in breed history to accomplish this. She retired from the ring after the 2008 NAKC Year end Super Show alongside her big brother, Bismarck, taking all four BOS to his four BOB/GRP1’s.

Caly finished her career a multiple Best in Show winner, the most titled and highest pointed female Shiloh in the history of the breed, and the only female Shiloh entered in the NAKC Hall of Fame.

Subsequent to her retirement, she was bred to GV NS Vision’s Chain of Command (“Chain”), producing an outstanding litter of 11 puppies, four of whom are expected to show and breed at a future date, including our male pick, Legacy. 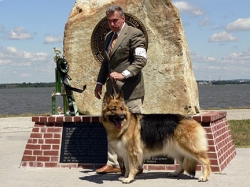 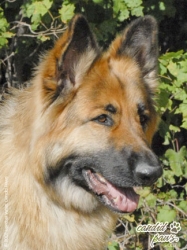 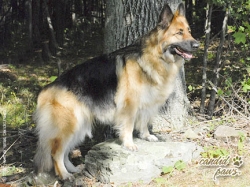 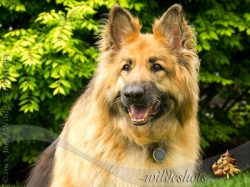 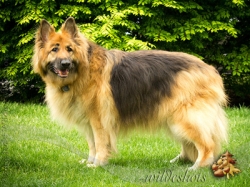 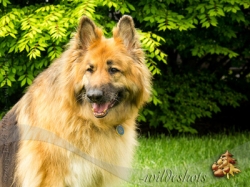 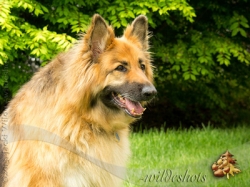